The Unofficial Mark and Brian Archive - By the Fans, For the Fans 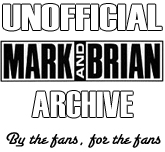 The Unofficial Mark and Brian Archive - By the Fans, For the Fans

Scroll down the page to the "UMBA Collection Contents" section to view the contents of this archive.

This IS the Unofficial Mark and Brian Archive (UMBA). It was created by avid long-time fans (jokingly referred to by Mark as "stupid replaceable listeners", or SRLs) of the "Mark and Brian" radio program. Many of these fans also share other memories and content on the fan-supported "Mark and Brian 25 Years" Facebook group page.

Who Are Mark and Brian?

Mark Thompson and Brian Phelps co-hosted a morning radio show for over 27 years. Their first show together aired on WAPI-FM (I-95) in Birmingham, Alabama on April 15th, 1985. Their last show on I-95 was July 17th, 1987, when they left to accept the morning show position at 95.5 KLOS-FM in Los Angeles, California. Their final show together aired on August 17th, 2012, two days after celebrating 25 years on KLOS. See their Wikipedia entry for more details.

What Are They Doing Now?

As of February, 2015, both Mark and Brian had retired their podcasts. Brian chose to do so to pursue other interests. Mark retired his podcast after he began hosting a new radio show called Mark in the Morning on 100.3 FM KSWD "The Sound" in Los Angeles.

Contact us at unofficialmbarchive@gmail.com. Contributing Content While we happily accept content in any format available, we prefer the FLAC and MP3 audio file formats if you have a choice. You can send files that are small enough to attach to an email directly to the email address above. For larger files or a large number of files, you may prefer uploading the content to a Dropbox folder or shipping physical media to us. Please send us an email regarding these options if you'd like to contribute. Reporting a Problem Are you having a problem with one of the files on the UMBA collection? Contact us at the provided address. Include the exact page and file name that you experienced a problem with, along with a description of the type of problem you encountered.

The UMBA collection wouldn't be possible without content contributions from Mark and Brian fans. Credit where credit is due is given on our UMBA Contributors page.

Revisit (or experience for the first time) the comedy bits, celebrity interviews, contests and all-around crazy adventures that made up a Mark and Brian show, just as they were originally aired, on our Show Recordings page.

After Mark announced his pending retirement, he and Brian both selected memorable bits, interviews and events from their 27 year history together. Here are Favorite Past Moments audio and video contents from Mark, Brian and their Stupid Replaceable Listeners.

Mark and Brian featured a variety of recurring characters in comedy bits on their program. Over 200 of the most popular bits from their 27 year history are featured on our Popular Comedy Bits page.

Being based in what is arguably the entertainment industry capitol of the world, Mark and Brian had access to the biggest names in show business. Check out some of their Celebrity Interviews to see why Hollywood's stars were also Mark and Brian fans.

The "No Apparent Reason" Game

"No Apparent Reason" was a trivia game that pitted a listener or celebrity against Mark and Brian and "M&B family" members Kelli Gates and Frank Sontag. Ted Lekas, the show's producer, was responsible for creating the "Ten Ted Approved" questions that drove the game. You can relive past games in our No Apparent Reason section or enjoy new fan-driven editions in the For a Very Apparent Reason Facebook group page!

Whether it was the "Top 5 Bee Facts You Didn't Know" or the "10 Best Ways to Keep the Sex Hot in Your Marriage", Mark and Brian shared a variety of facts, tidbits and occasionally downright-weird nuggets of information with their listeners. The Lists highlights some of the many lists shared on the Mark and Brian radio program through the years.

Mark and Brian famously captured that "old time radio magic" when they recreated golden era radio plays, live, on their morning show. Featuring top Hollywood talent both in front of and behind the microphones, the performances exhibited the same top-notch quality that was heard when radio was the king of nightly entertainment.

Mark and Brian loved celebrating holidays with their listeners. The Holiday Times audio and video sections contain all types of content including celebrity interviews, comedy bits, television specials and more, all centered around a particular holiday.

No holiday was bigger for Mark and Brian than Christmas. Their live Christmas Shows were the highlight of the season for many of their listeners. These live events featured the biggest names in entertainment and a select group of Mark and Brian listeners that were lucky enough to get a coveted ticket to the show.

Officer George Quarterman, the friendly head of security for KLOS despite "packing heat", always has a kind word of encouragement for anyone entering or leaving the KLOS facility. Mark and Brian made "Q Dawg" a regular part of their morning show by asking him to talk about what his wife fixed for breakfast or for a cold read of a comedy skit.

Rock Reports With Sal Cirrincione was a recurring feature on the Mark and Brian program. Listeners were always "in the loop" in the world of rock, thanks to Sal, Mark and Brian.

Todd Donoho was the sports anchor for KABC-TV in Los Angeles in the 1990s. He also regularly appeared on the Mark and Brian program during most of their 25 years on KLOS, beginning in early 1988 and remaining until their last show in 2012. The Sports With Todd Donoho section features some of his many appearances on the program.

Sports, especially football, played a big role in the Mark and Brian program. Making bets on the football teams that would reign supreme at the end of the season was a big tradition every year, and hearing the losers pay up quickly became a fan favorite. The Football Punishments section lets you hear and (probably for the first time) see the punishments carried out.

Appearances on Other Shows

Mark and Brian occasionally found themselves on the other side of the microphone during and after the duration of their show together. Appearances by Mark and Brian on other shows are featured in the Appearances on Other Shows section.

Mark and Brian released three Charity Albums containing popular program segments and live performances by a variety of performers during their 25 year history on KLOS-FM. The proceeds from all three releases were donated to charities, including the Mark and Brian/KLOS Scholarship Fund, The KLOS Food Bank Fund, The Mark and Brian Music For Kids Program, the Komen Breast Cancer Foundation, and the Make-A-Wish Foundation.

The Adventures of Mark & Brian

Mark and Brian starred in a short-lived television comedy series that aired on NBC during the network's 1991-1992 season. The Adventures of Mark & Brian featured Mark and Brian dreaming up a stunt or recalling a longtime fantasy, then playing it out as a film crew followed along. Some of the antics filmed for the series were also featured on their morning radio show.

Does anyone still visit here? If so, I can promise you a nice surprise once I get off my butt and transfer approximately 50 "Best of Mark and Brian" files from cassette to digital format. They are from the 2001 to 2003 time frame. Most of what I have is not currently listed in the Popular Comedy Bits section. Stay tuned for:

- Big City Bjork
- New Miniature Theaters
- Mark and Brian vs Kelly and Rita in Celebrity Jeopardy
- The Chinese man who drinks his own urine (my personal vote for funniest bit ever!)
- The Great White Hunter shooting toupees
- Brian making fun of a caller from Portland
- The original airing of Big City Tongue Twister that includes a few extra minutes of conversation explaining Kelly's weird laugh
- and, much, much more!

Interested?
Reviewer: TBaggett - - July 17, 2014
Subject: FYI for fellow reviewers
Thanks for your kind words regarding this collection that has been lovingly gathered by fellow M&B listeners!

Please be aware that leaving a comment here doesn't provide any way for us to contact you. If you'd like to contribute content or ask a question, please contact us email at unofficialmbarchive@gmail.com.
Reviewer: Rail Ranger - favoritefavoritefavoritefavoritefavorite - June 13, 2014
Subject: Stumbled Upon this Archive
I stumbled upon this site only because I wanted to join the Internet Archive to write a review on a narrator of the Mark Twain Letters. Being Mark Twain and Mark and Brian both started with Mark, I found this. Awesome!

I have just about every single downloaded mp3 file from the beginning of Mark and Lynda's Podcast saved on my laptop. I have friends who are technically challenged and do not own the technology to listen to the podcast, no matter what podcast is out there, so I saved them, to be able to burn them periodically and give them to my friends to stay somewhat current.

Recently, new listeners to the podcast are so excited and want to download everything there is to download, and hit a brick wall. Apparently iTunes doesn't store everything, just the last 100 shows. I may not have every single episode they produced, but I do have many you can't get from iTunes any longer.

I even have the shows Mark is doing call "Cool Stories in Music" podcast. I do have every on of those episodes.

These are large files, on the average under a 100 MB each.

I have listened to the Brian and Jill podcast for a while, and determined that the show is almost mirror like in terms of content from the Mark and Brian show on the Radio. I got bored with it, although it is engaging and fun to listen to, just not as creative as Mark and Lynda podcast.

The Mark and Lynda podcast has undergone changes as the months now years gone by, and constantly going through changes. That's ok, it is fresh content, always.

And because of Mark's association with Kevin Pollack, I now watch the Kevin Pollack Chat Show, his show is on the average 2 hours long, and each guest he engages with are great to watch and listen to. Recently, he had George Carlin's daughter on the Chat. So far, every episode on Kevin's podcast, is downloadable except the episode with Dana Carvy, I'm just not able to download that chat show at all. I've brought it to their attention, especially on Dana's birthday, and still no results.

Let me know how I can post what content I do have of the Mark and Lynda and Mark's new podcast Cool Stories in Music.
Reviewer: antelopevalleycat - favoritefavoritefavoritefavoritefavorite - May 28, 2014
Subject: WOW!!! Am so crazy happy!
I been with markandbrian for the last 20 years then I moved to Ga. My hometown state thinkin they and theclassic rock were gone forever but now am freaking out cuz I found you guys and am listening to 95.5 klos right now , its hard to put into words how I feel I think am gonna cry lol this is great ty ty ty unoffical fan for the brightness in my days to come. Wil Brooks